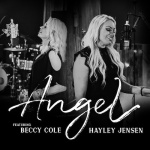 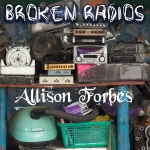 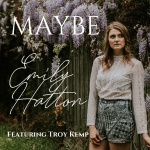 In the words of band member Luke Panic, Sydney-based outfit The Buffalo Grass Boys are ‘a bunch of dudes who like playing music and singing songs and creating art to go with our music’. So it is that for their new single, ‘Daydream’, they have released some art along with the song.

The band collaborated with Giedre Domzaite, a freelance animator and art director based in Sydney, and gave her free rein to create whatever she liked to accompany the song. The result is a video that is worth watching multiple times – so it’s just as well that the song is worth multiple listens too. It’s a song about melancholy with a driving rhythm that suggests that getting past that melancholy is the goal – and the way through is honesty.

Innocent Eve is a duo made up of sisters Bec and Rachel, both singers and songwriters. They grew up on country, folk and Americana sung by their parents and grandparents, and they’ve been singing and performing together with their family since they were children. Innocent Eve came to be in 2014, with a debut album,  Temporary Balms, released in 2015, and in 2016 there was an EP, True North, produced by Matt Fell.

The duo have returned to Fell for their new album, Viking, which will be released in the middle of this year. The title track has been released as a single (with the video available below). The clarion call to the listener comes early in the first verse and after that you’re on the hook; by the time the chorus arrives it’s a siren’s call, with the sisters’ inviting vocals, and the rest of the song passes as a rich dream. The song is a cautionary tale that is also about inevitability – the futility of caution when it’s not something you really want to hear.

This playlist features new releases across the spectrum of Australian country music (and one Kiwi). Track listing below.

Laura Frank – ‘Things I’d Rather Do’

Hannah May is a singer-songwriter from New Zealand who’s now resident in Brisbane. She was one half of Mae Valley, who released an outstanding EP in 2016 and opened for Kelsea Ballerini, Keith Urban and Carrie Underwood. This year May was one of the finalists for the highly competitive Toyota Star Maker competition (May is no stranger to competitions – Mae Valley placed highly on The X Factor NZ).

Not May has released the self-penned track ‘Passenger Seat’, which was produced by Peter Holz, who has worked with acts such as The Veronicas. May has a beautiful pop tone in her voice, and as her melodic sensibilities tend towards country music, country pop is a great fit for her. ‘Passenger Seat’ is a love song with gentle lyrics and a catchy pace that suggests. Its appeal is irresistible on two fronts – May clearly has the ability to write songs that become earworms, and also songs that you want to listen to because they make you happy.

May is working on some more new music, so hopefully it won’t be too long before we have more songs that make the day better simply by existing. 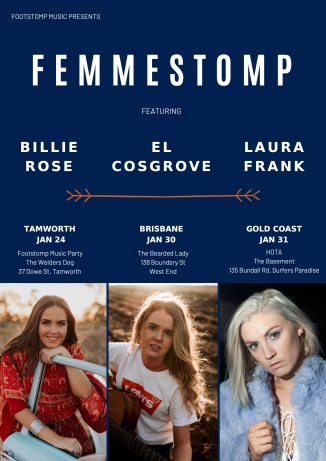 El Cosgrove, Billie Rose and Laura Frank are three singer-songwriters who sit under the country music umbrella yet have diverse styles and sensibilities. They have united to bring together their fantastic individual sounds under the banner Femmestomp, with a debut show at the 2020 Tamworth Country Music Festival on 24 January at The Welder’s Dog.

The trio were brought together by the team at Footstomp after Billie Rose talked to them about a tour of her own. While they didn’t know each other prior to embarking on the tour, there is the prospect of collaboration, with Billie Rose saying, ‘I think it’d be awesome to do some songwriting with the girls down the track.’

Only three shows are planned for now, which means punters should make sure not to miss out – although they haven’t ruled out other shows, coordinating schedules could take some time so there are no guarantees!

The other two dates on the tour are:

For those not yet familiar with the work of these three artists, tracks are available below.

Shane Nicholson is known as a songwriter and singer with many exceptional albums to his credit; over the past few years he’s also established himself as a producer in great demand, and as a mentor of up-and-coming country music talent. He is a fixture at the Tamworth Country Music Festival, appearing on the following dates:

Ahead of the festival he released a new single, ‘The High Price of Surviving’, co-written with young Queensland songwriter Leyon Milner. It’s another great song amongst many in his catalogue, which begs the question: is he capable of writing a bad song?

‘Well, I’ve certainly written a couple,’ he says with a laugh. ‘I try and hide them as much as possible and don’t let other people hear them. I certainly wouldn’t try and record them. There are always bad songs. What I’ve learned though is that the more time goes on, the more songs I write, the more albums I make, I don’t actually finish the bad ones any more. I used to. You’d have a pile of songs and then decide your favourite or the best ones for a record. It doesn’t really get to that point now. So if the song’s not working or if it’s not going to be great, I can seem to identify it earlier. And I don’t bother finishing it. So the last few records I’ve made, the only songs that are written and finished are the ones that actually are on the record.’

END_OF_DOCUMENT_TOKEN_TO_BE_REPLACED

Emily Barker is a hugely talented and accomplished singer and songwriter across a range of genres, including writing for film and TV. She’s originally from Western Australia; she’s been living in the United Kingdom for the past few years but has returned to home shores for a string of dates that includes appearances at the Tamworth Country Music Festival, ahead of the release of her album Shadow Box at the end of this month:

Emily’s Tamworth plans started when she had an invitation from a music industry contact who’s an artist manager she met in Nashville at the Americana Fest, who happens to be Fanny Lumsden’s manager.

‘Fanny and I are friends,’ Barker explains, ‘and our managers met and became friends. And since then we’ve had this nice communication going with us sort of helping with any questions on the UK and him helping with any questions on Australia, even though I’m Australian, obviously, [but] I’ve lived over there for such a long time. So he’s been really helpful and he’s one of the people who’s who does some of the organising and bookings and things like that. So he got an invite and sent my stuff around to a few people and then various other things came from that. I think we’re doing about four shows and the one that he was a part of was Americana in the Park.’

The other places she’ll be playing are mostly venues she’s played before, although there is a bigger plan behind the tour schedule.