My conversion to Australian country music came about because of the song ‘Lazy Bones’ by Beccy Cole. It was so smart and funny, and performed so well, that I couldn’t believe I hadn’t already heard it. That was before I understood how country music is so often not played on major radio stations and that, despite its large and loyal audience, it’s not considered as important to our national culture as some other forms of music. That latter element is a big part of the reason why I started writing about it – and so was ‘Lazy Bones’. That song and other country songs like it deserve to be known by as many people as possible, because the quality of this music is good. And Beccy Cole as an artist has few peers. Her live performances are legendary, her albums always a collection of songs that are heartfelt and entertaining, and sometimes just raucously good fun. There’s actually not an artist like her in the whole land. Which is why it was a huge honour to interview her recently about her new album, Lioness, which has all her fantastic hallmarks and also brings something new.

I’ve been lucky to listen to an early copy of the album, which has been a thrill because you have long been one of my favourite country music artists. Congratulations – it’s wonderful. Your fans will be very happy.

Thank you. I hope so. It’s definitely an album that I wanted to make so all I can do is hope that they like it.

This album has all women working on it, and I was really pleased to see you had a female producer working on it – there is a noticeable lack of female producers. Catherine Britt has been doing some producing but I’m really struggling to think of other producers working in country music who aren’t men. You had Julz Parker producing this – how did that come about?

I wanted it to be a 100 per cent female project. I love the sound that Julz gets for the Hussy Hicks and some other projects that she’s done, and I just think she’s awesome. She gets me. She’s got a very similar sense of humour – we always get along really well whenever we’re touring and doing shows. I get the Hussy Hicks whenever I can. They’re overseas a lot. Whenever they’re around they look up my tour dates and say, ‘Hey -can we do those six you’ve got coming up in Queensland?’ and I say, ‘Yeah!’ [laughs] But they’re just really cool to hang out with and I knew that Julz got my music and understood me. I didn’t really have any doubt. When we were choosing people to mix the album we sent away ‘Lioness’ and got about six mixes back and I had to choose which one I liked, and I said, ‘I like number three’, and Julz said, ‘That’s my mix.’ I thought, Yay!I love the fact that it’s an all-female album as far as the players on it go. There are nine girls on it.

END_OF_DOCUMENT_TOKEN_TO_BE_REPLACED

In May I posted about the single ‘Watered Down Man’ from Melbourne-based singer-songwriter Riley Catherall. He’s now released a second single from his upcoming album and it’s another lovely tune, although quite different in content and tone from his first. It’s also enhanced – as any song would be – by backing vocals from Kasey Chambers.

Catherall’s songs are simple, and that’s meant as a compliment: he is clear in the story he is telling and the emotion and meaning within it, and these are elements that come from authenticity and experience (and, probably, writing lots of songs before you decide on the ones you wish to share). Chambers’s vocals add some drama, mainly because it’s hard not to listen to her and hear a heart breaking. They’re also tonally a great match.

With two for two wonderful songs, Catherall is already on the way to an impressive debut album.

Take Me to Town may count as one album but it’s actually three CDs full of Australian alternative country music artists, some of whom will be familiar to readers of this blog – such as Tracy McNeil, The Weeping Willows, Lachlan Bryan, William Crighton and Jen Mize – and some who may be unknown simply because they are new.

Take Me to Town is the creation of Dave Favours from Sydney label Stanley Records, in concert with Chris Hamilton of Americana site Post to Wire, and Areatha Bryant of Mother Hen Touring. The trio decided on a list of artists and also secured some tracks that are exclusive to this release, from Ben Leece (who is about to release his debut album) and the always-compelling Katie Brianna, Sam Newton, Den Hanrahan, Peta Caswell and the increasingly prominent Michael Carpenter. Indeed, almost half the songs are exclusive to the compilation, so if you’re a country music fan who is wondering if it’s worth purchasing, that alone should convince you.

I’m fond of saying that country music is a broad umbrella and this compilation is proof that alternative country, too, deserves that description. The 47 tracks demonstrate that alt-country is flourishing around the land and pushing that genre, and Australian country music in general, into bold territory. There are elements of traditional country forms in these songs, reworked in a contemporary way or with a vocal flourish that creates something interesting. In some ways the compilation is an education about how country music is being interpreted and fashioned by new or new-is artists, and also how the work of more established artists like Lachlan Bryan and The Weeping Willows compares with songs from emerging artists. In this way the compilation also serves an almost anthropological purpose: the artists on this album are all pretty much from the same generation, yet how they approach their work is 47 ways of different.

END_OF_DOCUMENT_TOKEN_TO_BE_REPLACED

The website of Brisbane band The Ragtone Ramblers says that the band is ​’Playing in the pocket where country and jazz unashamedly mingle’. With influences of western swing and hillbilly, the band’s new EP, Ragtone Stomp, is a vibrant, beautifully executed, toe-tapper that features three great vocalists accompanied by steel guitar, double bass, tenor banjo and washboard.

For those who love older-style, upbeat country music that is of exactly the type to tempt you onto the dance floor, you will be hard pressed to find tunes more appealing than the six on this release. And for those who aren’t sure if they like that kind of music: just listen and try to not feel uplifted by the joy that is so clearly on this record.

Ragtone Stomp is out now.

This is actually not a single release so much as using a single to announce an album release … as this single was released in late July. Melanie Horsnell will be well known to many fans of indie and alt-country music in Australia. Steve Appel is also known for King Curly.

Candelo-based Horsnell and Blue Mountains inhabitant Appel met only last year at the Bellingen Winter Music Festival and then shared a European tour billed as ‘Two Australian Songwriters’. Over the course of almost nightly shows for six weeks across seven countries, songs were written and developed the point that they decided to make an album together.

That album, The World Has a Gentle Soul, is now released. ‘Someone Like You’ will give you a taste of the duo’s delightful melodies and gentle, mesmerising sound.

Or buy from the artist: 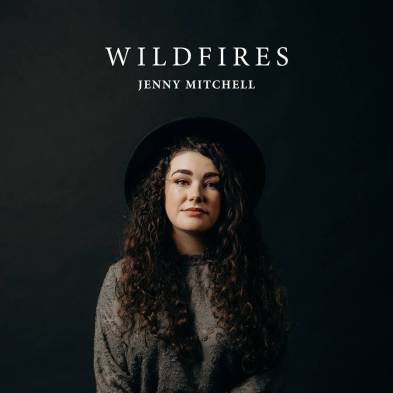 If you’re looking for an excellent start to the week, the new single from New Zealand singer-songwriter Jenny Mitchell can help you out. ‘Wildfires’ is a cracker of a song and the first single from Mitchell’s next album, to be released later this year.

Mitchell has a terrific voice, and on this song it’s married with a snappy beat and snarling guitars to match the tale of a toxic relationship. ‘Wildfires burn so easily’ she sings, and we believe her.

The gift of this level of talent and skill on a song is that the listener is immediately on the hook, as you will be as soon as you listen to ‘Wildfires’.

Mitchell is a graduate of the CMAA Academy of Country Music and melds country, folk and Americana into her own unique style. She’s a rising star in her home country – but she’s going to tour here soon. Dates below.

Listen to ‘Wildfires’ on:

Newcastle singer-songwriter Catherine Britt has been a presence in Australian country music for so long that it’s easy to forget she is still a young woman. She has released several albums, toured extensively, survived breast cancer and its treatment, bought Rhythms magazine, and recently become a mother. She has also moved to the other side of the mixing desk and become a producer – a very welcome development, given that Australian country music has many female artists but mostly male producers. Britt had the credentials to be a producer years ago – she emerged almost fully formed as artist, and her knowledge of music, especially country music, is vast – so she may become so busy producing other artists that she has little time for her own music. Which is why we should treasure her new project and album, both titled Catherine Britt & the Cold, Cold Hearts.

The album was recorded in Britt’s home studio, Beverley Hillbilly Studios, with engineer Jeff McCormack, while Britt and band members Michael Muchow and Andy Toombs produced the album, with Bill Chambers appearing on all the tracks.

Britt has often written personal songs, but not – from memory – a song cycle that is almost entirely personal, as this album is. In that way it’s an evolution from her previous album, Boneshaker, and musically it’s also a change, featuring a more stripped-back country style that suits Britt’s ‘honky tonk girl’ roots as well as the nature of the songs.

Britt has always been able to command and control emotion in her songs in a way that never feels manipulative of the listener, and that is true of several songs on this release, including ‘Too Hot to Quit’. She also does a very good haunting ballad, such as ‘The River & the Gum’. While her sound is always steeped in country music, she makes the most of the fact that there are many strands to country. Each of her albums contains a variety of song styles that always sound like Britt but which illustrate that her intelligence, experience and knowledge are such that she can call up what each song needs without giving into the temptation of doing what she’s done before.

In this Britt is reminiscent of Kasey Chambers – you could never mistake one for the other, and if they sang each other’s songs you’d be able to tell who wrote what, yet they both have an extraordinary ability to synthesise their musical history, talent and lyric abilities to create songs that come from a deeply personal place and are also universal. We don’t hear either of them being referred to as counting among ‘Australia’s greatest songwriters’ – they are not in that hallowed canon, apparently – but that’s what they are.

On this Cold, Cold Hearts record Catherine Britt proves – not that she needed to, because she has already done this, over and over – that she is an artist for the ages, accomplished, daring and strong. Let’s hope she continues to find time to write, record and produce her own music as she continues on the path of supporting other artists, leaving her mark, no doubt, on them the way she does on those who love her music.

Catherine Britt & the Cold, Cold Hearts is out now through Universal Music.

Buy the album from Catherine Britt’s website or on: