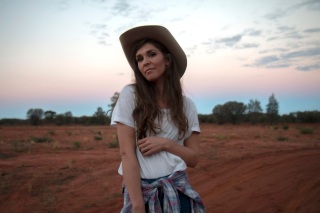 With just one album Fanny Lumsden has established herself as one of Australia’s leading country music artists. Her superb songwriting – each track on that album, Small Town Big Shot, is a gem – and her effervescent live performances have connected with audiences all over Australia. Not only that, but they’ve been awarded with a 2017 Golden Guitar, the CMC Best New Talent Award, and the APRA Professional Development Award

An important reason for Fanny’s popularity is her willingness to tour to places that often don’t host gigs, with her Country Halls Tours. Fanny has just announced that she will soon embark on her sixth annual Country Halls tour, in support of her new album, Real Class Act, which will be released on 22 September.

Fanny and her band, The Thrillseekers, will be heading to country halls in New South Wales, Victoria and South Australia, in towns including Burren Junction, Mullaley, Tullamore, Eurongilly, Tumblong and Andamooka. The tour will also aise funds for local communities, and will journey to metropolitan areas, BIGSOUND and Tamworth Country Music Festival along the way.

For the full list of shows, visit www.fannylumsden.net
Tickets are now on sale.